This game is a hybrid of a choose-your-own adventure type computer game and a pen-and-paper roleplaying game. It is compatible with the fifth edition of the most popular roleplaying game in the world (you know the one).  To play this game, you'll need a 1st level character  for 5e. You can create one using the free character creation feature at DnD Beyond (opens in new tab), or by using level 1 pre-generated characters. You will need to have this character sheet either printed out or open in a separate browser tab. You will keep track of your character's hit points, spells, and inventory on your character sheet, and keep track of enemies using your own scratch paper. The game will play GM and all enemies.

For a Spanish-language translation of this game, see La Cripta Sagrada. To download this game and play offline, visit DriveThruRPG .  A version of this game with extended player controls is available at Artemis Games.

You can continue the adventure with A Miner Problem or fight one-on-one at multiple different levels with 5e Arena.

lmao frick chuck (i don't use the actual f-word. unless i have the rage of 1000 suns within me.)

Small typo during the Wooly Goat. Your wrote "The dwarf peers and you and remarks, “What’ll it be?”" Should probably be "at you". Good game btw

Thanks. I've corrected it for the update, which should be published this coming week.

Hello! I'm really enjoying your game! Is there a way to generate a permalink at a location to "save" your progress so you can open it up at the same spot in a different browser?

Not currently. I'm working on an update that will include a save function, but it won't be done for a few weeks.

Hello, there! I'd be interested in translating your adventure into another language. Is there a good way to reach out to you for something like this?

Thank you so much for making this game. It was really fun! In fact, I was so inspired by your game that I decided to make my own using your guide and posted it here as well! It was a lot of fun to make and even play through myself.

Wow! That's great. I can't wait to try yours out. Thanks.

Good fun. Made it through with a ranger who preferred to keep problems at a distance.

D'OH! Chewed up by jackals, fell in a hole, died. Hopefully they found someone more competent to halt the defiling of their leader's body. ;-)

Oh no! First level is very susceptible to bad luck. If at first you don't succeed . . .

Thanks! There's a sequel linked above and I'm working on another game now that uses grid combat

Made it out with 1 HP... blessed be Ikro

Whoa! What was your character?

Had a lot of fun playing this with a couple characters, especially a wizard which I thought would be trounced, but some rocks and the catapult spell came in very handy, especially when you get some good damage rolls and the enemy gets really crappy Dex saves.

Can't wait till you publish the next one, and hopefully many more after that.

Have had this bookmarked ever since it blew up on Reddit, so glad I finally gave it a shot!

An excellent little adventure. I love how it was both a basic introduction to D&D, and allowed me to get a better sense of the character I was playing!

Great! Glad you enjoyed it. I'll have another one coming out in the next couple of weeks.

Really great. Don't ever get a chance to play with actual people, so this scratched an itch. I went with a Farmer homebrew class. He is proud about how he did defending the tomb and is excited for his next adventure!

I've heard of Farmer as a homebrew background but not as a class. That sounds really interesting. Glad you liked it!

I managed to get through it and find out (nearly) everything without any cheating! I got surprisingly good rolls when it counted, though I did roll several nat. 1s in a row at one point. And of course, as a completionist, I insisted on following up every lead before going to the cemetery :P

...Though apparently I did too well, because I killed the cultist before he finished the ritual. Guess I missed out on the very end...

Hahahaha dude! Me and my wife had an awesome moment playing it as Turgut, a Turkish Alp (soldier) from the middle ages, a Fighter of course and Lawful God highly religious ( we are watching Ertugrul, a series in Netflix so we created a character from there xD)

So I was DM ( she doesnt know anything about D&D ) So I created the char for her and explained the basics which you explain combat awesomely.

So Turgut was brought by a spell from the monks to help them with the mission. At first he didn't understand a word in Common language (didn't speak common but Turkish ) so monks had to do another spell so he could learn xD ( we had to somehow add a character from real life to DnD)

She didn't ask for any info just went straight away to train at the fight she rolled 1 twice which lead her opponent to victory. Then went straight to do the mission without getting info.

After doing everything til the boss (no spoiler) she didn't want to flee and decided to attack ot straight away ("r u sure? u already know what's in the other room" "No I'm Turgut, Ertugrul's Alp God will guide my blessed axe" "Remember when it was alive it almost destroyed a city by itself" "My faith is bigger than tha" "ok")

hahahaha we were laughing like no tomorrow and well Turgut alp became its slave...we laughed more because in Netflix series Turgut is brainwashed!!! That's its fate in the series and in DnD universe hahahaa

Haha! This is great! It sounds like she really got into it. And thanks for the show recommendation too.

No prob thanks to you. Keep going you are doing great.

First time through, Kobold Divine Soul Sorcerer. Almost got off'ed by ol' shovel, though managed to do better against the "boss".

I see this is great for introducing players into the game, though for myself the only novelty will be through character creation - it took me about the same time to write out the sheet all prim and proper as it did to get through this tutorial...

That said, I do appreciate what you have done with this. It is nice to be an Adventurer once again instead of the Dungeon Master (playtime combined 1-year campaign as D.M. > a few months in different Sessions as Adventurers), so this break is appreciated.

Thanks. I'm planning to write another adventure, this time less tutorial and more expansive. I'm also a DM, so I hear you on getting to play a PC.

Starting on a new one now. It may take a few months.

Loved it. I would have beaten it for sure with my randomly generated wizard if [SPOILER]I had not gotten poisoned, that disadvantage + bad rolls got me good at the final fight[/SPOILER]

You can avoid the poison by getting the password from the journal in the Tavern.

Ohhh I missed that. I was wondering if I could leave the cemetery to go back to the temple and heal, but considered that kind of cheating... And seeing the events at the end, I would probably would've come back too late lol

Are there more places where you can play solo stories like this? I had so much fun and I'd love to play more.

Saw your post on one of the D&D subbreddits I follow yesterday and thought Id give this a shot. It was nice to play as I'm usually the Perma-DM. Made a Mountain Dwarf Twilight Cleric and had a ton of fun, this was a good way to kill 45 minutes or so and I appreciate the distraction from all the fucked shit in the world right now. Keep on creating man you've definitely got a talent for this sort of thing.

Thanks! I'm starting on a new adventure. I hope to finish in a few months, since I have other projects in the way.

Pretty good. I went through with a winged tiefling artificer first because I had just done one for a game and had the sheet still open. Went through it pretty straight forwardly, only taking the practice fight before going to the cemetery. Ended up dying in the end because the character was more focused on being a team member than a solo character. Decided to go through again with another character, and noticed you should maybe make that a bit easier than having to undo all previous choices. Did a half-orc barbarian this time, and went through all I could before going to the cemetery this time. Won easily, good game.

Thanks! Barbarians and fighters are definitely easier to play in this one. 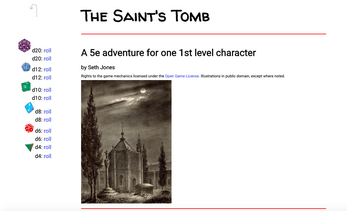 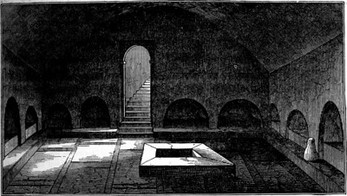 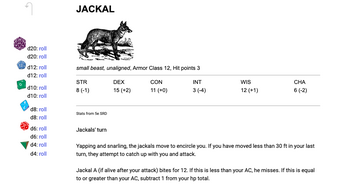